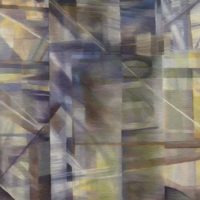 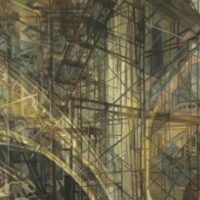 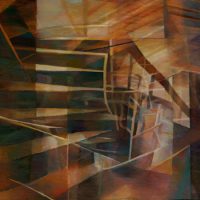 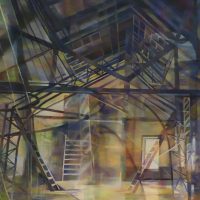 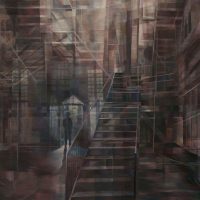 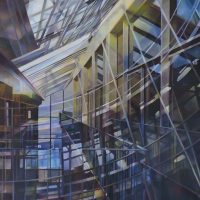 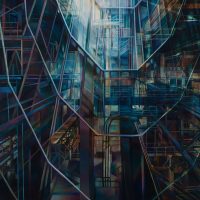 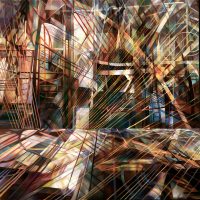 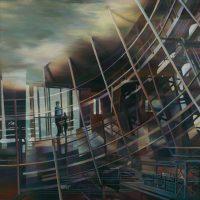 In my paintings, the viewer can observe or enter as the confusion of space is meant for contemplation or self-guided journey.

The work of the Portuguese artist Maria Helena da Silva, 1908-1992, has always intrigued me. Her invented spatial environments have influenced my work, as my paintings also define space, but within the context of architecture. The floating architectural elements I employ are meant to produce a sense of continuous spatial reconfiguration, structures that move imperceptibly as if by the passage of time. The non-descript figures that sometimes appear are shadows of people encountered along the way.

My influences also extend to architectural drawings, the girders of anticipated buildings and especially scaffolding that fills those spaces. They are skeletons and placeholders, which describe space, and are evidence of geometry that is the armature of experience.

My work is intended to represent the geometry of time. The planes are memories, which float in and out of infinite space to form combinations and permutations of events, remembered, experienced, and imagined.    – Nancy Newman Rice

About The Artist
Nancy Newman Rice was born in New York City and was educated at Cornell University and at Washington University, where she earned a BFA with honors and an MFA. She has been awarded a National Endowment for the Arts/MMA Fellowship for painting, Artist’s Residency Award at the Cité Internationale des Arts, Paris, France and nominations for a Tiffany Award and an AVA Award in the Visual Arts. Ms. Rice has exhibited her work internationally and has had a number of solo exhibits in both galleries and museums including the Saint Louis Art Museum, MO; The St. Louis University Museum of Art, MO; The ReginaQuickCenter for the Arts, NY; The Museum Gallery of Southeast Missouri State University, MO; The Walter Wickiser Gallery, NY, Duane Reed Gallery in St. Louis MO, and in Chicago IL; and the Sazama Gallery in Chicago IL. Ms. Rice has also participated in group exhibits in national museums and galleries including, The Woodward Gallery, NY; The Cedar Rapids Museum of Art, IA; The Wustum Museum of Art WI; the Daum Museum of Contemporary Art, MO; The Katharina Rich Perlow Gallery NY; and the Craighead- Green Gallery, Dallas, TX. Her work is included in public and private collections in the U.S. and abroad. Ms. Rice has also written articles and reviews for national arts magazines, and The St. Louis Post Dispatch, as well as catalog essays for artists’ exhibitions. She recently took early retirement from Maryville University, St. Louis MO, where she taught painting for 34 years and was the director of Studio Art.